The revival of traditions in the Central Asian ‘Island of Democracy’ 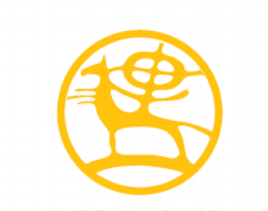 Why would a country with one third of its population[1] living below the poverty line spend 2 billion som from its state budget to organise “The World Nomad Games”? What is the meaning for the citizens of Kyrgyzstan of this intercultural celebration for the national image of the country, economy and society in the ‘island of democracy’ of Central Asia? What are the perspectives for hosting the Third Nomad Games?

The post-colonial syndrome of ‘revival’

In the history of the nation-state, there are striking examples of ethnic and cultural renaissance in the process of national identity (re)construction. In this context, the term ‘national identity’ refers to the desire to create a nation-state with distinctive characteristics (language, symbols, culture etc.). At the end of the nineteen century, the Gaelic League was formed in Ireland.[i]. This Irish nationalist organisation aimed to increase the national consciousness of the Irish population against British cultural domination. The Gaelic movement provoked a cultural revival in Ireland by emphasising its historical territorial unity, byresorting to over-idealisation of the Gaelic past, Irish traditions and culture.
The famous historian, Eric Hobsbawm, in his work “The Invention of Tradition” argues that traditions often have fictitious connections with their historical past. In reality, traditions are mere ‘inventions’ or constructions of modernity, a set of social practices with symbolic characteristics[ii]. The main purpose of the “Invention of Tradition” is to promote values and standards of social behaviour. Thus, the novelty of tradition is usually lost in its periodic ritualization, imprinted in the consciousness of individual and society. “The Invention of Tradition” became an increasingly popular practice in the modern post-colonial and post-Soviet space. In their search for national identity, the CIS countries are designing modern vision of their nations, combining historical cultural and ethnic traditions with the contemporary trends of democratization. 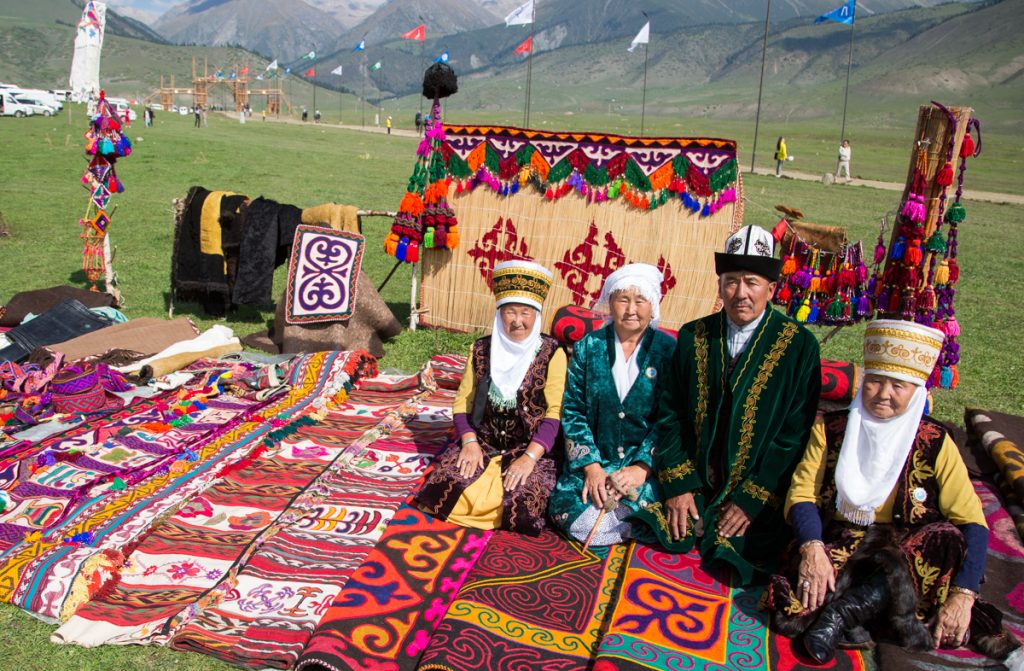 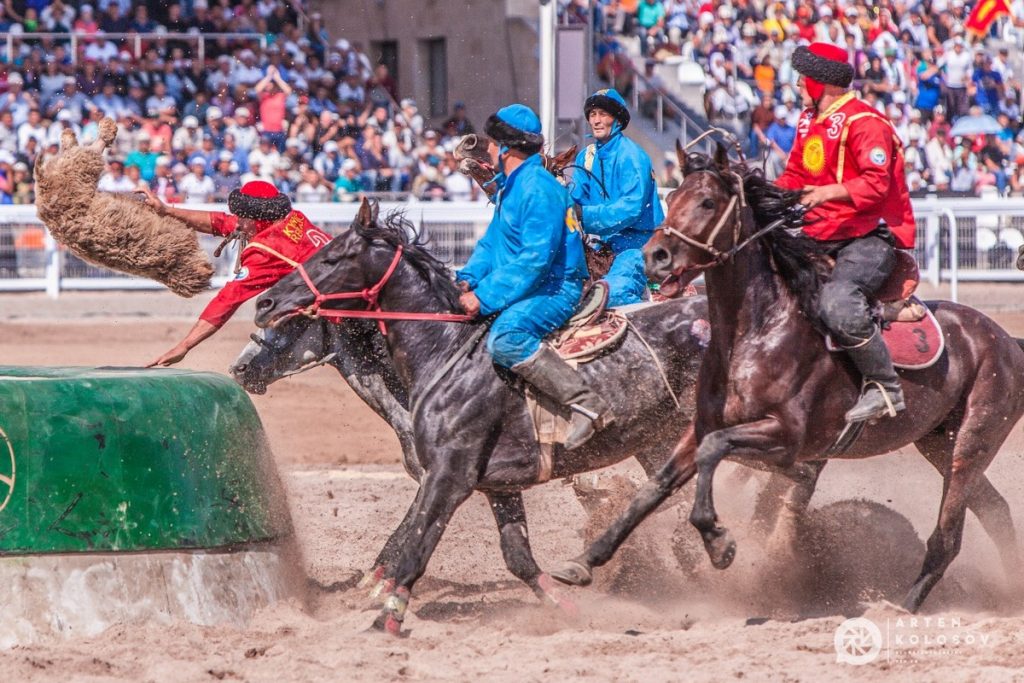 The experience of hosting the World Nomad Games is not new for Kyrgyzstan. The first World Nomad Games were held there in 2014, more than 430 athletes from 19 countries participated[iv] . The first attempts to raise the national spirit of Kyrgyzstanis were initiated during Akayev’s regime (see Table 1), however these state-sponsored activities did not receive widespread public support nor financial contribution from independent donors.
What were the underlying reasons behind the success of the Second Nomad Games? Which type of audience this event was targeting? What are the realistic expectations for the future? The roundtable discussion “The Nomad Games”, debating these and many other relevant questions, was held on 12 October 2016 in Bishkek, chaired by Keneshbek Almakuchukov.
Experts’ opinions on the motivating factors behind the organisation of the Second Nomad Games could be classified into several categories:
1. The “survival instinct” of national values in conditions of increasing globalization, eroding the fragile frames of national identity;
2. The search for national identity and intention to demonstrate “the Kyrgyz concept of the world”;
3. The opportunity to mobilise and instrumentalise “cultural lifts” in order to promote many young and talented youth and artisans, who are otherwise deprived from recognition. The demand for entering “wider social space”;
4. The awareness of the great past, affecting a spiritual revival as an impetus for rethinking cultural roles and values in Kyrgyzstan. Filling the ideological vacuum with national ethnic sentiments in the post-USSR period. The renewal of the ‘semantic load’ of the national history;
5. As a prospect for the future, the development of culture as a “sovereign resource”.
In general, the experts concluded that the Second World Nomad Games were timely and necessary for national consolidation. 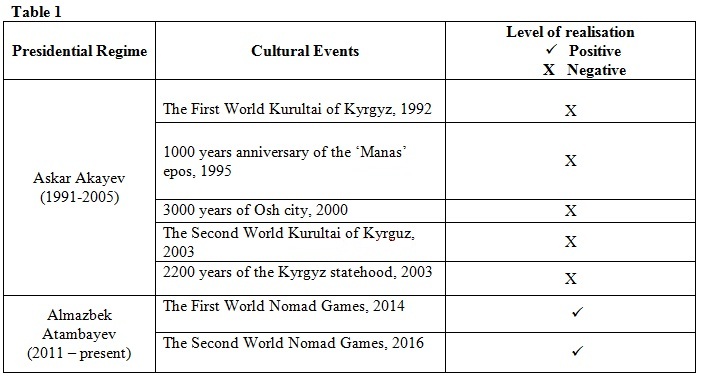 Public Opinion on the Second World Nomad Games
In September 2016, the SIAR research and consultancy agency conducted a sociological survey on the views of the population of Kyrgyzstan concerning the Second World Nomad Games. This study covered 1000 respondents in total, aged 18 and older across the whole country. The sample was proportionally distributed among all regions. This research revealed attitudes and expectations of citizens about the World Nomad Games in Kyrgyzstan.
The majority of Kyrgyzstanis (91.6%) were well informed about the ongoing organisation of the event. The most optimistic views about economic benefits from the World Nomad Games were voiced by students (60.5%), local CEOs (50%) and entrepreneurs (48%). It is important to note that respondents with above average income saw greater potential in the World Nomad Games, as well as opportunities for increasing of personal and public capital.
Residents of Talas region (10.3%) expressed the greatest skepticism about the correlation between the national economy and the World Nomad Games. In contrast, the Issyk-Kul (56.8%) and Chu (50.3%) regions scored highly on the perceived economic impact of games. These figures are not surprising, as the inhabitants of Issyk-Kul and Chu areas were geographically closest to the event, and actively participated. Therefore, they encountered direct economic outcomes.
The majority of the Kyrgyz population believes in the increase of national image of Kyrgyzstan due to the Second World Nomad Games, with 71 % of population agreeing with this statement. Citizens of Bishkek (68.9%), residents of Issyk-Kul (82.7%) and Naryn regions (71.1%) thought that the Nomad Games provided a positive contribution to social development in Kyrgyzstan.
Women (13.7%) admitted that they experienced a greater sense of pride and gratitude to the organisers of the Second World Nomad Games. Both genders were equally sympathetic to the growing sense of patriotic awakening. They hoped that the World Nomad Games would become a regular event.
Men (15.8%) said that the provision of security (helping to stop violent incidents) is an important positive characteristic of the Second World Nomad Games. CEOs (50%) identified “unity / friendship of people in the Kyrgyz Republic” as a decisive factor for future games. The representatives of the service sector (12.5%) think that the games may contribute to the regional farming in the long term. In particular, residents of Naryn region (13.3%) were positive about this initiative.

Finally, the extent of public reaction to the conduct of World Games Nomads was enormous, given that almost one hundred percent of the population were aware and desired to participate in the event. The World Nomad Games possess a unique resource base for the development of tourism and regional farming. 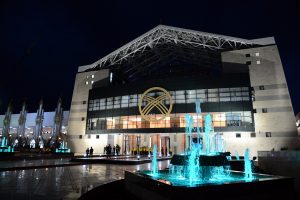 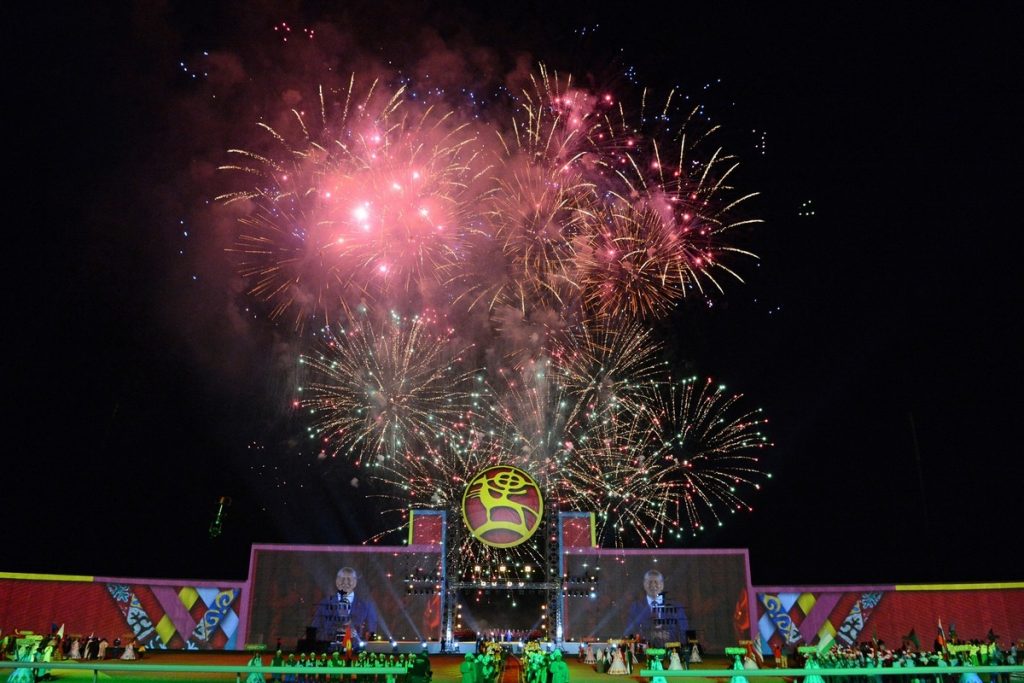 Nomadism Branding
Erica Marat (2009)[v] used the term “branding” while examining the nation-building process in Central Asia “. Kyrgyzstan could be considered as the country which most skillfully promoted the branding of nomadism aspart of its revival of national traditions.
Analyst of the Institute of Humanitarian Design, Alexander Tretyakov compared the World Nomad Games metaphorically with a holiday, gathering many friendly nations. Holidays in Kyrgyzstan and Central Asia are perceived as “positive collective actions” which guide people’s emotions and hearts. Holidays are also able to mobilise and consolidate society into a single national-family. The World Nomad Games has all necessary sovereign resources and nomadism branding and message of “nomadism” can create a new opportunities on the national and international levels for Kyrgyzstan.

This article is the outcome of collaboration between the CASPIAN Horizon 2020 Network and the SIAR Research and Consultancy Agency.
The author would like to thank all participants of the “World Nomad Games” roundtable and my dear SIAR colleagues, Nurshat Karabashov and Ainoura Sagynbaeva for their stimulating comments and suggestions. Particularly grateful to Huw Houssemayne du Boulay for reviewing and polishing the English version of this article.